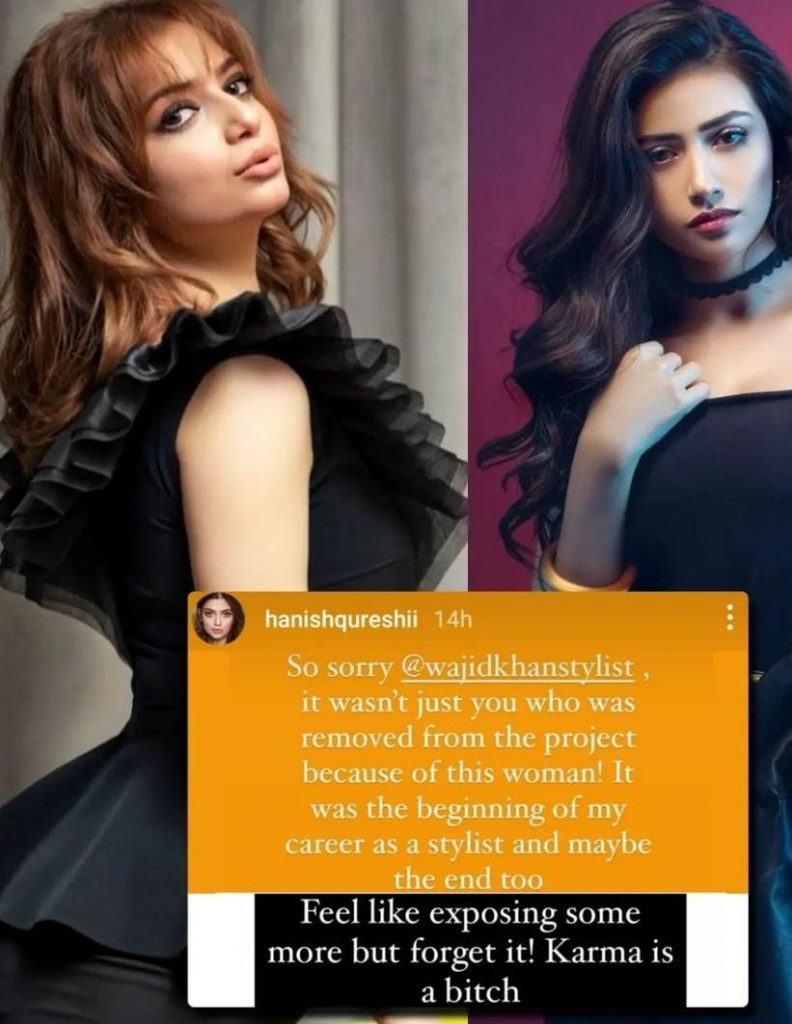 Actor Faysal Qureshi’s daughter Hanish took to her Instagram stories to share her experience with actress Sana Javed amidst the on-going controversy.

The young stylist said that the Khaani star is one of the reason why her career got jeopardise.

Apparently Sana got her replaced from a project which was disturbing for Hanish.

Hanish concluded by saying, “Karma is a bitch”.

Earlier stylist Wajid Khan recently came forward and detailed his harrowing experience with the Romeo Weds Heer actress. Wajid Khan is a well-known celebrity hair and makeup artist who is noted for his impeccable work and humble demeanour. He turned to his ‘gramme and wrote a lengthy comment about his meeting with Sana.

He wrote in his post, “I am not too surprised to hear about Sana Javed as this has been a recurring issue for evenyone who has worked with her. My brand was signed as the makeup artist for a project and when I was doing her make-up, I suggested her some ideas to enhance her look on screen as I have worked with big screen actresses in Pakistan, US and in India. She had the audacity to go to Producers and said that “wajid toh meri buraiyya kar raha hai and I am not comfortable working with him’. So I was asked to step back from the project because she made them do so.”

“Trust me, I have worked with much bigger names at IIFA and Miss Universe, but I have not come across anyone who is so toxic and unprofessional as her. She should focus more on her acting rather than playing games with people. We are all artists and as important as anyone else on the set. If she doesn’t know how to respect the fellow artists, then industry should not work with such shallow people who only bring defame to a project,” he continued.

The post ‘Because of this woman, karma is a bitch’: Faysal Qureshi’s daughter Hanish exposes Sana Javed appeared first on Daily Qudrat Global.